The Social Causes of Unions

Are Your Dues Funding Planned Parenthood?

This post was written by Jonathan Able, an intern with the Freedom Foundation.

People of faith should be very concerned with the social agenda of major government unions. These unions collect hundreds of millions of dollars in dues each year from their members, allegedly for the purpose of workplace representation. Unfortunately, most members have no clue where their money is really being spent and are being misled. In Washington State and across the nation, government unions use their members’ dues to support a far-left social agenda that seeks to undermine traditional marriage and promote abortion.

The Freedom Foundation recently analyzed the past three years of federal financial reports for just five of the major unions that represent public employees in Washington. We analyzed both the financial activity of the local, in-state unions as well as the contributions of the various national union headquarters that Washington workers also pay dues to support.

All told, public employees represented by these five major unions financially supported $10.7 million dollars in union contributions to organizations opposed to traditional marriage and supportive of abortion between 2012 and 2014. 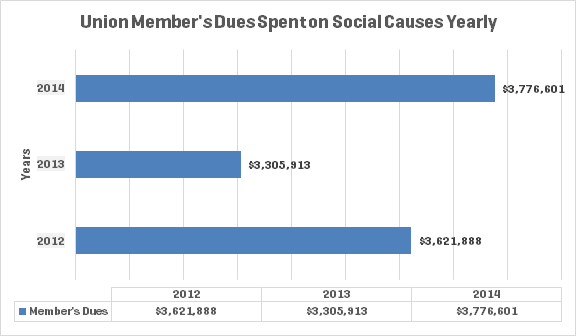