Can an organization that exists to prevent babies from being aborted be forced to tell people how to get free abortions?  That is a question the United States Supreme Court will consider on Tuesday when they hear oral arguments in the case of NIFLA v.Becerra.

In 2015, California legislators passed a bill called the “Reproductive FACT” Act, which forces pro-life pregnancy centers to tell women who come into their center where they can receive free abortions. It also requires pregnancy centers to post a notice in their facility that says, in 48 point font, that ”This facility is not licensed as a medical facility by the State of California and has no licensed medical provider who provides or directly supervises the provision of services.”

The same disclaimer is also required to be on every advertisement.

That requirement makes many forms of advertising impossible.  Web ads, for example, often don’t allow that many words.  Billboards or other large advertisements would also become impractical.  A message that said “Pregnant? Let’s Talk” would be forced to include the 29-word disclaimer in the same or larger font making the purpose of the advertisement useless.

It is worth noting that California recently legalized marijuana. While the now-legal pot stores are regulated, they don’t have anything close to the restrictions on advertisements that pregnancy centers have.

It seems in California that the advertising restrictions for non-profit organizations that give away baby clothes may be more onerous than those for stores that sell drugs.

It is also apparently unprecedented to require an establishment to advertisement what they do not do.

The Family Policy Institute of Washington, along with other state-based policy organizations, filed an amicus brief to the Supreme Court urging them to strike down the regulations as an unconstitutional violation of the First Amendment’s right to free speech.

You can read that brief here.

While the Supreme Court will hear oral arguments on Tuesday, a decision is not expected until June.

FPIW’s president, Joseph Backholm, will be covering the oral arguments on this case from the Supreme Court in Washington DC.  You can find Facebook live coverage of the events on our Facebook page at www.Facebook.com/familypolicy or follow the blog at www.fpiw.org as well.

After such a tumultuous election FPIW has been asked, “What happened and where do we go from here?” 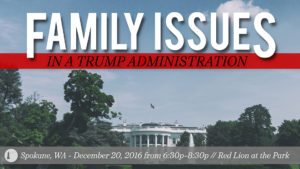 Join us on December 20th, at 6:30pm, for our “Family Issues in a Trump Administration” forum at the RL Red Lion at the Park Hotel in Spokane.

At this special event, we’ll talk about the national implications of the recent elections, including what Congress is expected to do, appointments and judicial vacancies we expect to see filled, and the direction of the nation as a whole. We’ll also address the impacts the recent elections had on our state government and preview the legislative session in Olympia.

Perhaps most importantly, we’ll get you equipped to plug in and make a difference.

Barronelle Stutzman, the 72-year old floral artist and grandmother being sued by Washington Attorney General Bob Ferguson and the ACLU for exercising her constitutionally protected freedom to act consistent with her faith, will be in Court on Tuesday, November 15th as the Washington Supreme Court hears oral arguments.

Stutzman served her longtime friend and customer – and his partner – for nearly 10 years, but could not participate in and design floral arrangements for his same-sex ceremony because of her love of Jesus and his teachings about marriage. Barronelle faces losing everything she owns for acting consistent with her deeply held convictions.

The arguments begin at 9:00 am, but we will begin gathering at the Carlson Theatre at Bellevue College at 7:30 am. We recommend arriving early to get in line to ensure a seat. Some of us will remain outside for a peaceful prayer gathering during oral arguments. We will provide signs and refreshments. A debrief will take place after the arguments conclude with Barronelle (location TBD). Please bring your family and friends and join us in supporting Barronelle!

The Carlson Theatre is located at, 3000 Landerholm Circle SE, Bellevue, WA, 98007-6406.  You can let us know that you plan to attend by RSVPing to the rally Facebook event.

On Thursday, October 6th, hundreds of thousands of students across the country will bring their Bible to school.

Organized by Focus on the Family, the third annual “Bring Your Bible to School Day” encourages students to assert their religious rights at school and share their faith with classmates.

“This student-led event is a simple way for children and teens to celebrate religious freedom and to share the hope and inspiration they receive from reading their Bibles,” Focus on the Family said in a news release publicizing the event.

The First Amendment to the U.S. Constitution protects the religious exercise and expression of students in public schools.

In fact, schools must allow students to read their Bible during non-instructional time, including free reading time during class, between classes, during lunch, and before or after school. Students must also be permitted to distribute religious literature and share their faith with classmates.

Alliance Defending Freedom, a religious liberty organization, has provided a legal memorandum about the event, explaining the First Amendment rights of students.

But many schools and faculty members, misunderstanding the meaning of “separation of church and state,” needlessly and illegally restrict the constitutional rights of students concerning religion at school.

Last month, for example, we brought you news about Caleb Zavala, a first grade student enrolled in a California public school. School officials dispatched a sheriff’s deputy to the Zavala family home because Caleb had been sharing Bible verses with his friends during school lunch. The Palmdale elementary school has since apologized.

Focus on the Family hopes that “Bring Your Bible to School Day” serves “as a timely, vital way to empower modern-day Esthers and Daniels to be courageous in standing for their faith.”

Frustrated about the election?  Thinking about sitting this one out?

Before you do anything, come spend an evening with us at one of our “Defending Freedom” events.

Regardless of how you feel about who is running for President, the people elected throughout the state and nation are going to make decisions that dramatically impact your family, your church, and religious freedom.

Our “Defending Freedom” series will show you the specific policy decisions that are at stake and how the upcoming state and federal level will impact them.

At this event, attendees will: