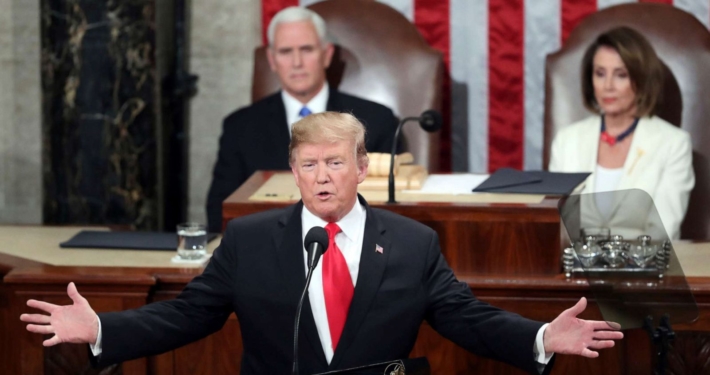 On the first Article of Impeachment, senators voted 52-48 to acquit, with only U.S. Senator Mitt Romney (R-Utah) joining the democrats, and on the second Article, Sen. Romney rejoined his colleagues and the vote was 53-47, along strict party lines.

It would have taken 67 votes on either Article to remove the president from office.

And on Tuesday night, on the eve of his acquittal, a bold President Trump made his case for the future of the United States. In case you missed it, here is the full text of the speech.

In addition to introducing a number of honored guests, the president spoke on the booming economy, the importance of religious freedom, prayer in schools, ending late-term abortions, jobs for historically high unemployment groups (minorities, youth, and women), and fixing our nation’s bloated healthcare system.

He also brought up school choice, paid family leave, addressing the opioid crisis, ending America’s longest war in Afghanistan, and the need to fund and preserve HBCU’s (historically black colleges and universities). His many invocations to God and his honoring of various Americans were especially emotionally uplifting.

We had hoped that the President would have addressed the crisis of the increasing sexualization of children in our schools and culture, and the moral and ethical corruption of many of America’s increasingly decadent institutions (universities, Super Bowl halftime shows, news media, Hollywood, tech businesses, governments, social sciences, etc), but all in all, President Trump covered all our issues: Life, Family & Marriage, Religious Freedom, Parental Choice, and Christian Social Justice.

The President deserves our praise: he articulated the most Christian-focused State of the Union Speech presented by any President in my lifetime.

You can watch the speech in its entirety here:

Unsurprisingly, President Trump and Speaker Nancy Pelosi shared a noticeable and mutual disdain for each other’s presence. At the conclusion of President Trump’s speech, Speaker Pelosi dramatically ripped up the copy of his speech that he had handed to her at the beginning of the evening, ending centuries worth of decorum, civility, and tradition around the State of the Union Address. Congressional Democrats, many of whom were dressed in white, interrupted the speech with moans and murmurs multiple times, shouting at President Trump and declining to stand and applaud for even the most heartwarming moments of the evening.

It was reported this morning that House Democrats gave Nancy Pelosi a closed-door standing ovation yesterday morning for her post-speech antics.

This, of course, comes as President Trump enjoys his highest approval ratings since taking office in 2016.

I’m appealing to Donald Trump to become the emotional and moral leader of our country, as he so inspiringly demonstrated at the State of the Union last night. The Democrats have applied vulgarity and disrespect, even hatred, to the institution of government, seeking to offend their opponents and establish a dominant rule that crushes the values we hold dear. To win the heart and soul of America, the president must fill the void of moral leadership that exists, by repenting of his past ways and asking Americans to unite behind the principles and documents that make our nation so exceptional.

Related: FPIW’s Religious Freedom Day is in less than one week! Please make plans to join us on Tuesday, February 11 at the Capitol in Olympia to celebrate and rally for the values we all hold dear!

We’ll keep you updated on what’s going on nationally and here in Washington State. As always, we’re grateful to have your support!