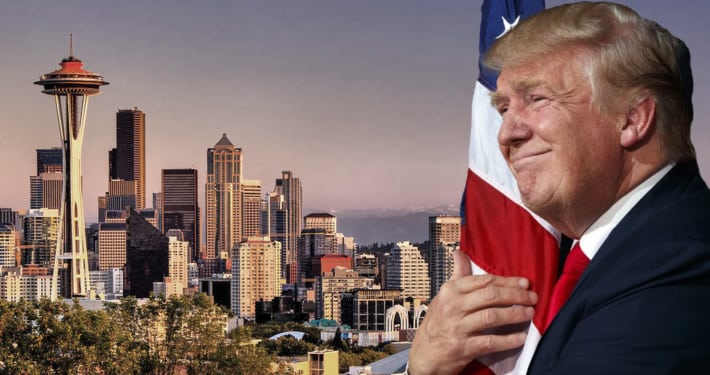 It’s a comedy of errors, but it’s not very funny.

Areas that were recently green spaces along highways are now overrun by homelessness while taxpayers complain about needles and feces on city sidewalks.

Protesters, angry that oil companies have accounts at Chase Bank, managed to erect giant teepees in the middle of downtown Seattle streets.  Not only were they left alone long enough to put them up, they remained in place for 5 hours before they were removed.

While the City may not be cracking down on drug use or protestors blocking streets, they are taking job creators seriously, slapping them with a $275 per person fine for having the audacity to give someone a job.  Only days later, they followed that up with a decision to put a property tax increases on the ballot this November.

This was just the last week.

Last year the City Council made it illegal for landlords to screen rental applicants based on criminal records.  Not only are criminals not arrested for engaging illegal conduct out in the open, the council wants to require you to rent your property to them.  Even if you also live there.

Maybe watching all of this up close was part of the reason I wasn’t shocked when I read a Reuters poll indicating that on a generic ballot voters prefer Republicans to Democrats.

In one sense, this is really surprising. Voters who said they intended to vote for Democrats fell from 45.5 percent in November to 34.5 percent now.  Real Clear Politics, which aggregates polls asking the same question, found that Democrats still maintain a 4 point advantage, but that is down from a 12.9 point lead in November.  In other words, voters aren’t troubled by Republicans as much as they were.

We’ve been hearing for a year and a half about the blue wave that is about to sweep the country. Not just because midterm elections typically work against the party that just won the White House, but because we are also supposed to know that Donald Trump is a giant millstone around the necks of every Republican candidate.

The wave is inevitable.

Meanwhile, the President has been doing what he said he was going to do in the way only he can or would.

He got out of the Iran deal, appointed Justice Gorsuch to the Supreme Court, made progress with North Korea including freeing American Hostages, cut almost everyone’s taxes, got rid of the individual mandate in Obamacare, stopped the federal government from forcing nuns to pay for birth control, stopped the federal government from forcing schools to allow boys in the women’s locker room, reinstated the Mexico City Policy to make sure that America isn’t sending money around the world to pay for abortion, cut funding from Planned Parenthood when Congress wouldn’t, and has superintended a decline in the jobless rate as well as a 5,000 point rise in the Dow.  And he called Kim Jong Un a “little fat man” on Twitter.

And at the same time, Seattle has been doing what it does in the way only it can or would.

In doing so, they’re giving voters who care to look a valuable comparison in contrasts.

You see, Seattle is what happens when progressives get everything they want exactly like they want it. In Seattle, there aren’t even any elected Republican’s to mock or blame for obstruction. In Seattle, elected officials brag about the fact that they have no Republican friends and get cheered when they do so. In Seattle, the only competition on the ballot is between the far left and the far, far left.

For the left, Seattle is the dream and that dream now has some scary clowns and guys with chainsaws.

You may not love the tweeting, but you can turn off Twitter.  You can’t turn off $275/head and needles in the street.

Obama’s Presidency couldn’t help but be disappointing simply because the expectations were so unrealistic.  Is it possible that the expectations for Trump mean he’ll inevitably be a pleasant surprise?

Whatever the reason, the Big Blue Wave is starting to feel inevitable in the exact same way Hillary’s election was inevitable.

Sure, the left is gonna hate Trump cause that’s what they do.

This November, as they evaluate their options some of them may end up asking themselves if they want more Trump or more Seattle.

Then we’ll find out who really has a millstone around their neck.

Alfie Evans and the War on Family

Church Gets Sued Over LGBT Event. What’s It Mean for You?
Scroll to top