Glancing at Disney’s online princess store, we see product marketing focused on toddlers to early school-aged children. As Planned Parenthood aims to present their organization as trusted women’s healthcare providers, perhaps they felt the need to advise corporate America on setting good examples for the next generation of women.

However, experts on children’s health do not necessarily think this kind of message would be helpful. In fact, some believe it may be harmful.

“Introducing the concept of abortion to a toddler would not only be confusing but potentially traumatic causing possible fears of abandonment,” said Dr. Fran Walfish, Beverly Hills family and relationship psychotherapist, author, The Self-Aware Parent.

Walfish went on to further explain, “The likelihood is that a toddler would not understand the concept of abortion. However, if it were explained in any way that described the killing of a child, this could trigger a tremendous amount of conflict and anxiety in the youngster related to ambivalence about whether he or she is wanted.”

Gayani DeSilva, M.D., a Child & Adolescent Psychiatrist and author of A Psychiatrist’s Guide: Helping Parents Reach Their Depressed Tween, concurred with Walfish’s assessment saying, “Introducing those concepts too early may cause confusion and conflict. The idea that a parent would stop a baby from being born may cause the child to wonder why he was allowed to be born. He or she may wonder how abortions occur and the details of the process may be overwhelming for the child.”

When Planned Parenthood Keystone was asked who was responsible for creating their Twitter content and also if tax dollars were directly involved in their digital marketing efforts, they did not respond. However, the national organization declares, on their tax return for the calendar year beginning July 1, 2015, and ending June 30, 2016, that they spent $129,202,742 on what they describe as, “Increase access – Programs.”  According to Planned Parenthood, these programs are designed to, “improve access to reproductive health services and information by leveraging technology, enhancing existing capacity, and securing the role of  women’s health centers in the evolving healthcare system.” Nearly half of these funds or $61,737,493 came from taxpayer-funded grants.

So yes, its a poorly kept secret that directly and indirectly taxpayer dollars subsidize the creation of Twitter content for Planned Parenthood–much of which has nothing to do with improving “access to reproductive health services and information,”–as was the case with the now deleted Disney tweet.

On a day-to-day basis, they tweet plenty of other information that doesn’t fit this description either. Some additional content samples from the Planned Parenthood Keystone twitter feed are featured below:

What does John Bolton have to do with women’s reproductive health? 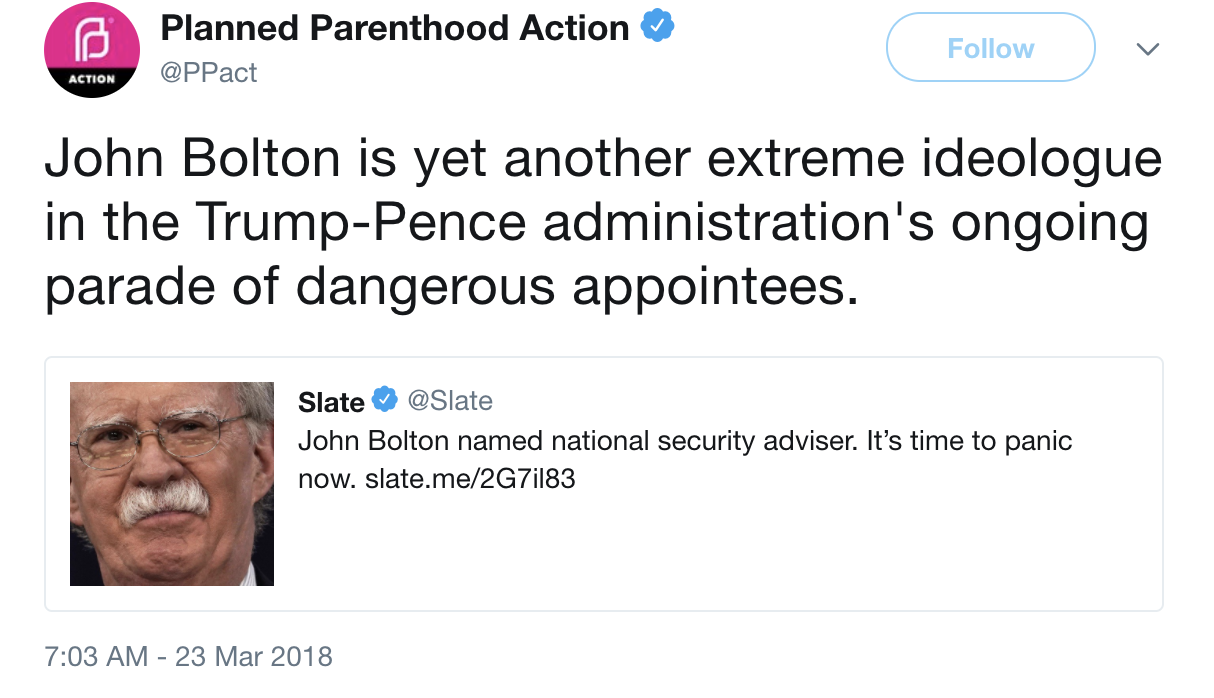 How about attacks on faith-based, crisis pregnancy centers? Does the disparagement of other groups addressing reproductive health issues accomplish their stated goals?

According to Yale University, the percentage of out-of-wedlock births in the United States has risen from almost 10% in 1960 to nearly 40% of all births in 2014. An interesting phenomenon to accompany the expansion of sex education as well as the reach and funding of organizations like Planned Parenthood who claim to care about family planning.