How Planned Parenthood Turns Birth Control into Cash (and why Politicians Help).

One of the bills has already passed the Senate Health and Long-Term Care Committee, SB 6219, and the other two are poised to do the same.

The fixation with birth control isn’t new either.

Last year the legislature passed a bill requiring insurance companies to reimburse for one year’s worth of contraception at a time rather than the one or three-month prescriptions some would fill.  I can see why it might be more convenient to get a year’s prescription rather than having to go back every month.  I have two daughters whose lives depend on daily access to a hormone but they are never allowed to have more than a 30-day supply of the medication.

Even if you accept the idea that birth control is just as necessary as food and water, the fixation with making it easier and always free is curious given the fact that 98% of sexually active women in America have used birth control at some point.[1]  That doesn’t suggest a crisis of access.

The question is why?

The picture becomes clearer, however, when you realize who benefits from this fixation.

While Planned Parenthood is known as America’s largest abortion mill, they make more money from contraception than from abortion.  Their business model essentially works like this.

First, write sex-education curricula in a way that encourages sexual activity by minimizing the emotional and physical risks so that everyone, including children, are more likely to be sexually active long before they are financially or emotionally ready to deal with the consequences.

Second, in the sex education classes, make sure those who should not be having sex know that they can get free birth control and abortions from Planned Parenthood at taxpayer expense and, at least in Washington State, without parental knowledge or involvement.  The document below shows exactly what is being given to public school students in the sex-education classes.  Note the emphasis on the fact that parents don’t have to be involved and Planned Parenthood is always available. 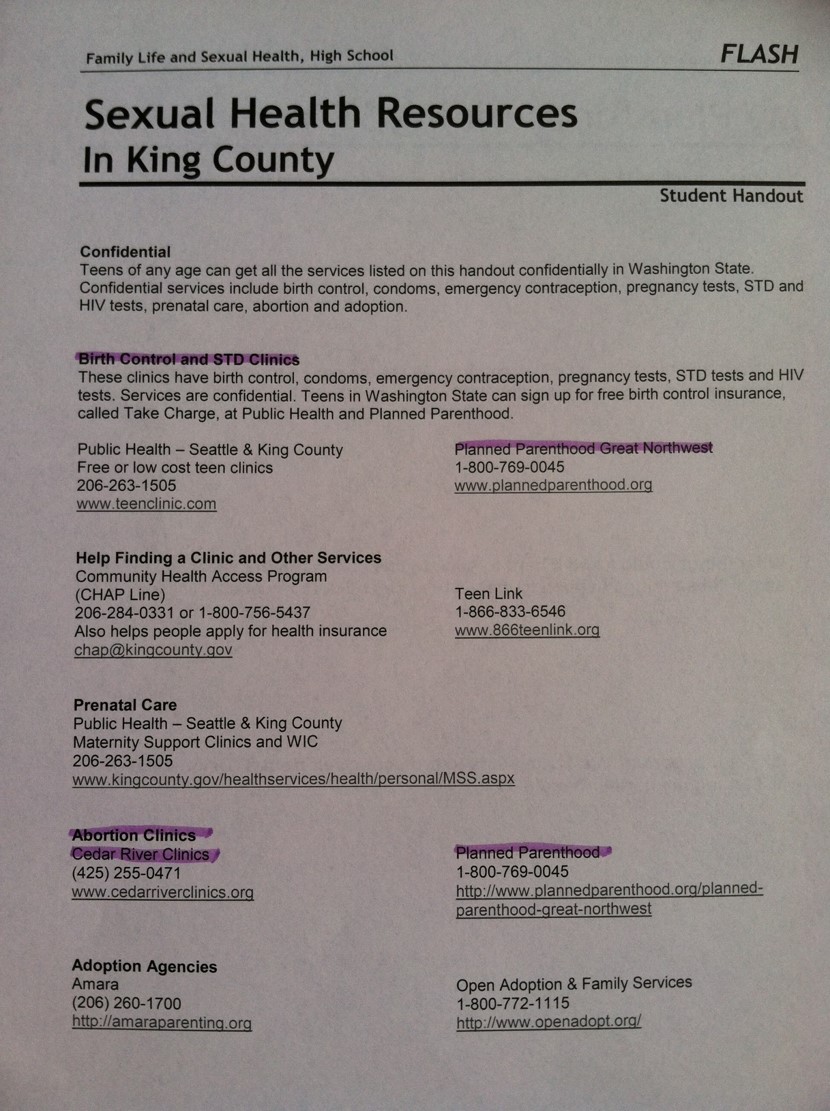 I established myself with the teens as an authority on sex.  I explained to them that their parents wouldn’t help them with their sexuality, but I would.  I separated them from their support system, number one, and they listened to me.  Second, our doctors prescribed low dose birth control pills with a high pregnancy rate knowing well that they needed to be taken very accurately at the same time every day or pregnancy would occur.  This insured the teens to be my best customers as teenagers typically are not responsible enough to follow such rigid medication guidelines on their own. I knew their sexual activity would increase from none or once a week to five or seven times a week once they were introduced to this contraception method.  Then I could reach my goal—three to five abortions for each teenager between the ages of 13 and 18.

Every step of the education, contraception, abortion cycle provides Planned Parenthood another government revenue stream, but contraceptives are particularly lucrative.

Profiting from Contraception in Washington

Much of Planned Parenthood’s money from contraception in Washington State comes through a program called Take Charge, which provides taxpayer-funded birth control to women who qualify based on their income.

Planned Parenthood promotes the program on their website, notifying women that they can  “Get a year’s worth of Birth Control in just one visit.”  In some years, Take Charge has accounted for 70% of all visits to clinics in Washington State.

In 2015, Planned Parenthood of Western Washington received more than $1 million from the state for oral contraceptives.  All “reproductive health care” reimbursements from the state are about $5 million per year.

The value of Take Charge to Planned Parenthood’s bottom line in Washington State likely explains why SB 6105, which is currently being debated, directs the state to create a new program “identical to the Washington state take charge program for individuals who would be eligible for that program but for immigration status.”

That bill would create a Take Charge for people who are in the country illegally.

Despite their obvious affinity for contraceptives, Planned Parenthood doesn’t make their money on the prescriptions themselves but from the dispensing fees.

Approximately ten years ago, the Department of Health discovered an illegal scheme Planned Parenthood was engaged in throughout the country.  The scheme involved purchasing prescription contraceptives at a reduced rate through the Public Health Service Act Section 340(b).

The problem was that after purchasing prescriptions at a reduced rate, they were not passing those savings on to the public they claimed to serve as the program intended.  Instead, they would mark up the cost of the contraceptives 400% or more and seek reimbursement from taxpayers through programs like Take Charge.  As a result, taxpayers were paying as much as $21 for a prescription that Planned Parenthood paid $3 for.

The difference between the acquisition cost and the sales price would be pocketed and categorized as “revenue in excess of expenses.”

While lucrative, the problem with that business model is that it’s illegal and resulted in several whistleblower lawsuits against Planned Parenthood, including one in Los Angeles by their former CFO.

When the scheme was discovered in Washington State, not only did the State refuse to recover funds that Planned Parenthood had fraudulently received, they actually worked with Planned Parenthood to create a way for their scheme to be done legally. In the end, the state agreed to allow them to continue marking up the price of the prescriptions but told them to classify the markup as a “dispensing fee” of $11.50 per unit.

In the last two years, the legislature has passed laws requiring both the state Department of Health as well as insurance companies to pay for one-year’s worth of birth control at a single time.  Previously, some companies had a practice of reimbursing for only a one or three months.

Here’s why that matters.  The same Department of Health that negotiated the dispensing fee for Planned Parenthood has authorized them to charge their dispensing fee on a per unit basis, rather than a per prescription basis. (See. pg. 66 of the Health Care Authority Family Planning Guide.)

As a result, if a woman makes a single visit but walks away with 12 months worth of contraceptives, Planned Parenthood is allowed to charge the dispensing fee twelve times for a total of $138.  Sources within the Department of Health have told us that if that woman had received the same prescription at a pharmacy, the pharmacy would receive a dispensing fee of $4.24.

If this seems like politicians taking care of political allies with taxpayer money you’re not wrong.

This is hardly the only favor Washington State is doing for Planned Parenthood.

In 2010, the State’s Medical Quality Assurance Commission created guidelines governing office-based surgical facilities, which include abortion facilities.  The purpose of the regulations was to ensure that every facility where surgeries are performed is similarly equipped to deal with contingencies that might arise.

Instead of requiring Planned Parenthood to be inspected and accredited by a third party like every other hospital or healthcare facility in the state, the state gave Planned Parenthood the authority to inspect and accredit themselves.   (See WAC 246-853-650(5))  No other entity or industry in Washington State has the authority to inspect themselves.

Another oddity of these bills is a new category of services that the state will be paying for.  Historically, Planned Parenthood has advocated for “women’s health.”  That term has served as a euphemism for ensuring that women can have as much sex as they want with as many people as they want without ever experiencing negative physical consequences.

That’s why it was conspicuous, this year, when the usual list of birth control, abortions, and screenings included hormone treatment for people with gender dysphoria.

At first glance, it isn’t obvious why there is a connection between pregnancy, STD’s, abortions and gender dysphoria…until you realize that Planned Parenthood is making a move to get into the gender concealment hormone business as well.

Yet another revenue stream.

But as you follow all these debates about who should pay for what and whether the state should be able to force religious organizations to do things that violate their beliefs, it’s important to remember that these debates have little to do with birth control.

Why has Washington State spent years trying to require companies to pay for 12 months worth of contraceptives at one time?

Why is Washington State requiring every insurance policy to cover every form of contraception regardless of moral objections?

Why has Washington State spent years trying to expand eligibility for Take Charge?

Why is Washington State creating a new program just like Take Charge for women who are in the United States illegally and therefore disqualified from being covered by Take Charge?

Why has Washington State created a dispensing fee that sends money to Planned Parenthood that others wouldn’t get for doing the exact same thing?

Sure, those pushing this legislation may actually believe that making birth control more accessible is making the world a better place, but that’s not why this issue is such a clear priority.  If the entity making all the money on these proposals wasn’t also making significant campaign contributions to all the people pushing this legislation you can bet the house we wouldn’t be debating contraception year, after year, after year.

However, they are making contributions, so politicians will do what is required to keep them coming.

Everyone says they hate crony capitalism, but when tilting the playing field ends up helping your friends and your campaign, it’s not that hard to rationalize why it’s actually a good idea.