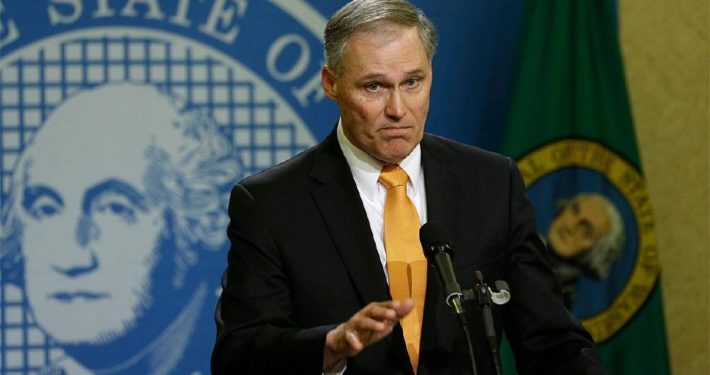 Special election results from the 45th legislative district (Woodinville/Redmond) last night indicate that the Democrats just took control of the Washington State Senate.  With that change, Democrats now control the Governor’s mansion and both branches of the legislature.

The stakes involved were reflected in the record $8.5 million that was spent was spent on the race, which filled a vacancy created when moderate Republican Andy Hill lost a battle with cancer.

The Republicans had been in control of the Senate since 2012.

Republican control of the Senate meant that Democrat leadership in the House and Governor’s mansion was forced to compromise on budgets, taxes, education, and a range of social issues.

That may no longer be necessary.

While the majorities in both houses are slim, (25 -24  in the Senate and 50-48 in the House) Governor Inslee is hoping it allows him to do everything he’s been unable to do since he was first elected in 2012.

He told The New York Times,  “We intend to make a full-scale effort in the next session of the Legislature if we win.”

This likely means an effort to pass a new carbon tax and possibly an income tax as well.

An income tax has been found to be in violation of the Washington State Constitution’s requirement that “all taxes shall be uniform upon the same class of property” but the current state Supreme Court is effectively an extension of the Democratic Party. There is some speculation–even hope in Democrat circles–that the Supreme Court will invent a new interpretation of the Constitution that allows the legislature to create an income tax.

While voters last night were giving Democrats control over all three branches of power, they also soundly rejected three separate tax increases that passed the legislature as part of this years budget.   It is likely that Democrats in swing districts will be less than enthusiastic about supporting substantial tax increases right before their elections.

On social issues, the landscape is likely to become very challenging.   The abortion industry, in particular, has had their legislative priorities stonewalled for five years.  The legislation they have proposed but failed to pass includes:

In addition, last night’s results could provide the opportunity for radical social policies from other Democratically controlled states to be debated in Washington. We could see things like:

Other issues tabled because of the Republican-led Senate that could be resurrected include:

While it was an off-year election with relatively little at stake nationally, in places where there were elections, Democrats did very well.  Voter enthusiasm appears to have strongly favored Democrats as well, a likely result of continuing anger on the left over President Trump’s election.

After President Obama was elected in 2008, Republicans proceeded to pick up 1,000 seats at the local, state and federal level across the country.  Whether President Trump will similarly inspire the left remains to be seen, but they are encouraged by the start.

For those of us in Washington State, we don’t need to wait.

If you care about life or religious freedom, your situation just became much more difficult.

It is far from impossible, but if everyone looks for someone else to take care of it, they probably won’t like the outcome.

Don’t Be This Pastor

Can Pregnancy Centers be Forced to Advertise Abortions? Supreme Court will...
Scroll to top