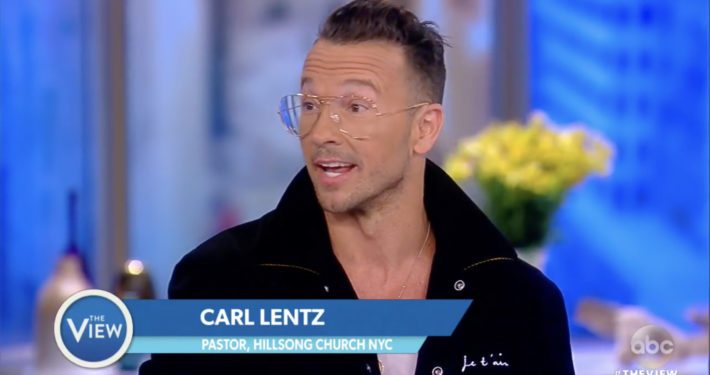 Carl Lentz is a pastor of Hillsong Church in New York City; a church that is best known for its music.

Last week he made an appearance on The View, as part of a book promotional tour.

The interview is a little uncomfortable but worth watching.

It starts off with a flurry as one of the hosts asks, “Hillsong is seen as this hip, millennial church…but it’s still evangelical. Where do you stand on social issues…like gay marriage, abortion, like how do you address those.”

Lentz is flustered. “So we’re going to go right there?” he responds.

For the record, this is not a vexing theological question.  God is opposed to abortion and same-sex, sexual relationships.

It seems Lentz knows this but feels like saying so would defeat some other purpose for the interview.

Upon gathering himself, he responds with, “I think our job is still…not necessarily to change how people think, but to try to point them to what God has said.”

If you’re trying to keep everyone happy, this may be the best play you can run.

First, say something heretical to score points with those who hate the God you represent, then say something biblical to remind your church you still care about what that God thinks.

It’s possible that when he said “It’s not our job to change how people think” what he really meant was, “changing your political positions aren’t of primary importance.” If that’s what he meant, then we agree.  But that’s not what he said so it is worth emphasizing that the gospel is definitely concerned with changing how people think.

That’s why we are to take every thought captive to the obedience of Christ (2 Cor 10:5) and be transformed by the renewing of our minds (Rom 12:2).  If it is true that “As a man thinks in his heart, so is he” (Prov 23:7) thinking straight is the foundation of discipleship and faith.

After that exchange, Lentz continues talking but doesn’t say much. What’s clear is that he means well, and he wants people to understand that he cares about them, but Joy Behar, one of the hosts of The View, tries to get the conversation back on point. “So it’s not a sin in your church to have an abortion?”

Lentz is on the hot seat again. “That’s the kind of conversation we would have finding out your story, where you’re from, what you believe.”

As if your story is somehow relevant to whether God thinks abortion is wrong or not.

But he’s clearly a nice guy.

He follows that up with, “God’s the judge.  People have to live to their own convictions.”   That little piece of heresy draws an applause from the audience.

Behar seems surprised.  “So it’s not an open and shut case with you?”

Lentz continues to equivocate. “To some people it is.”

To which everyone watching thinks, “Yeah, but she asked you.”

He tries to recover. “Before I start picking and choosing what I think is sin in your life, I’d like to know your name.”

Of course, whether Carl Lentz knows your name or not has no impact on whether your behavior aligns with God’s best for your life or not.

After that, they let him off the hot seat.

Lentz gained confidence when the conversation turns to racism.  After a host applauded his “courage” for calling out President Trump and speaking in defense of the Black Lives Matter movement, he explained his obligation to speak to the issue because “of course this is an issue, of course, this is wrong.”

If he must speak about race because God obviously cares, it makes one wonder why he had such a hard time saying anything about gay marriage or abortion.

I don’t know Carl Lentz. To my knowledge, this was the first time I’ve seen him or heard him talk, so there is no personal ax to grind.  I do not doubt at all that his intentions are good.

For me, however, this conversation perfectly captures the strategy of the American church when it comes to engagement with a secular culture in 2017: speak directly and answer questions only when you know progressives will agree, change the subject if you fear they won’t, and above all, remember that good marketing is what brings people to Jesus.

Feels kind of silly doesn’t it?

When its all over, the church gets the same response all the politicians get; a furrowed brow and a, “Why can’t you at least be honest?”

They know what we believe, but they don’t respect our unwillingness to say so and they shouldn’t.

Do people hate the church today?  Sure. Some do.  People hate anything that suggests they can’t do whatever they want to do.

Still, if we want to convince the world that we have a better alternative to suicidal hedonism, we should probably be prepared for obvious questions and we definitely shouldn’t be afraid to answer them, even if we think Joy Behar might disapprove.

Do Parents Have the Right to Seek Help for Their Children?

Democrats Take Control of Washington State. What Does It Mean?
Scroll to top