They want to be taken seriously.

But sometimes they justify the label.

For example, this headline. 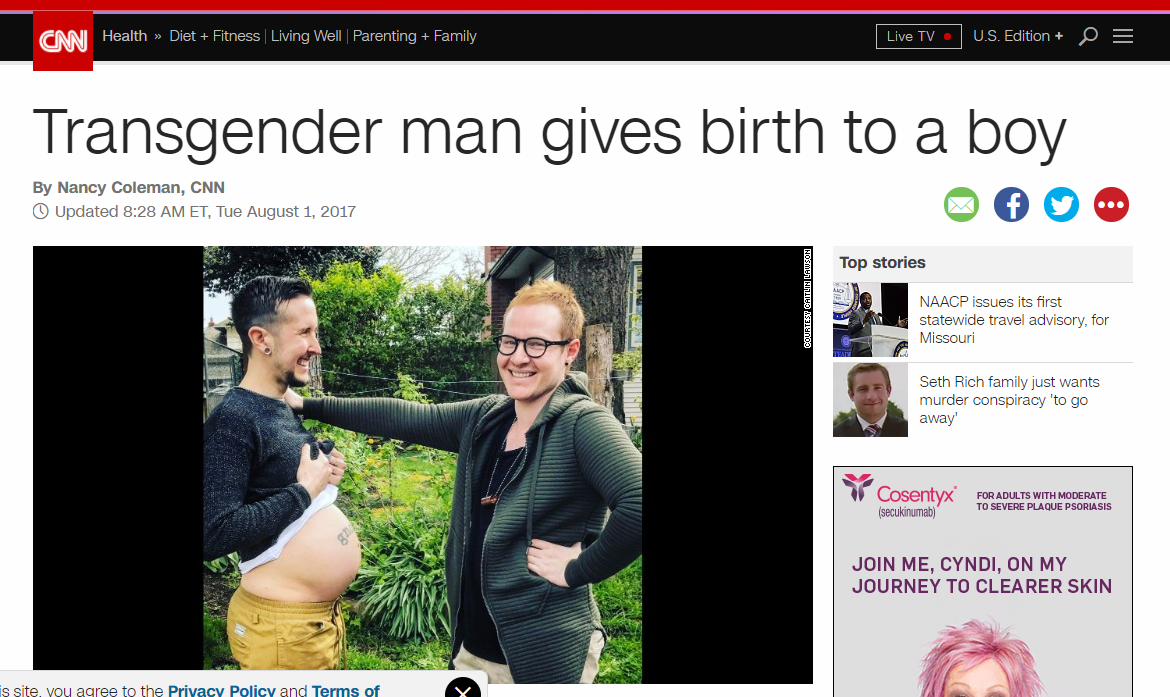 I could have sworn I saw this headline on the cover of the National Enquirer about fifteen years ago when the line between the intentionally ridiculous and the serious wasn’t quite so fuzzy.

Let’s break this down for a moment.

If you believe in biology and objective reality, you know that  men don’t give birth to anything.  So the phrase “man gives birth…” is a nonstarter.

But let’s say you are a reality denier.

Let’s say you will deny any objective truth in order to avoid offending someone you view as being part of a victim class.

Shouldn’t you at least do so consistently?

When you say “Transgender man gives birth to boy” you initially deny the connection between gender and biology but then–two words later–assume the gender of the baby based on his biology.

Of course there’s nothing wrong with acknowledging when a baby is a boy.

Nor is there anything wrong with acknowledging that people who give birth to baby humans are called women.

Both are observations, not judgments.

But the fact that CNN is willing to assume the gender of the baby but not the mother indicates that communicating truth is not their first priority.

Like a virus taking over a computer, the mind that writes the sentence “Transgender man gives birth to boy” has been completely corrupted by political pressure.

It can no longer be trusted to perform the function for which it was created until it undergoes serious repair.

If they were to write, “Man gives birth to homo sapien of undetermined gender” people would furrow their brow, but they might respect the desire for consistency.

As currently written, they’re just letting us know that they know what is true but they’re happy to lie about it if the social pressure is strong enough.

Which gets us back to the “fake news” bit.

If you want people to take you seriously, you have to take yourself seriously.  At a bare minimum, that should require the courage to call a spade a spade, even if you heard it would prefer to be a heart.