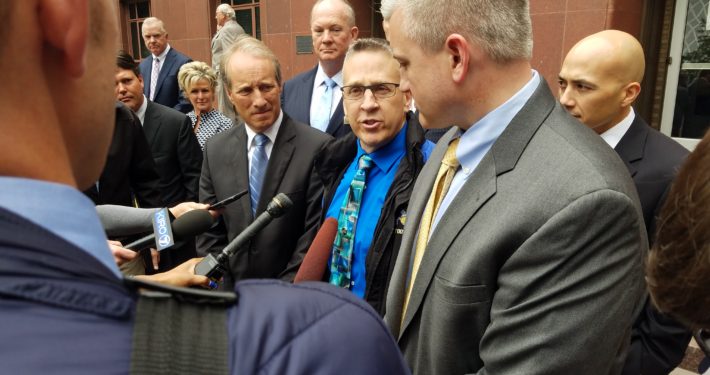 Can a school district fire a football coach for praying?

That was the question considered by the U.S. Court of Appeals Monday morning in Seattle.

More broadly, however, the court was debating what an “establishment of religion” actually is.

Joe Kennedy used to coach football at Bremerton High School.  When he first started coaching, he began a routine of taking a knee at the fifty-yard line after games to prayer.  A few players noticed and started to join him.  After eight years, the post-game gathering and prayer became part of the Bremerton football tradition that would usually include players from the opposing team as well.

In 2016, someone complained to the administration who, after an investigation, asked Coach Kennedy to stop praying with the players. He agreed.

But then the school went one step further and told Kennedy that not only was he prohibited from praying with the players, but he was not allowed to kneel on the 50 yard-line alone and say a silent prayer after a games.

Coach Kennedy asked the school district to permit him to take a knee for fifteen to thirty seconds to say a silent prayer on the fifty-yard line.  The school district denied his requested accommodation and instead offered him the opportunity to pray in the press box or other location out of view of players or spectators.

When he refused to comply, he was fired.

Coach Kennedy filed a lawsuit against the school district requesting his job back.

Through his lawyers, Coach Kennedy argued that the First Amendment protects his right to personal religious expression, even while working as a government employee.

The Bremerton School District, along with a lawyer from Americans United for the Separation of Church and State, argued that the sight of a football coach, dressed in school colors, and appearing to pray constituted an unconstitutional establishment of a religion.

The First Amendment’s “establishment clause” historically meant that the government cannot have an official state religion.

Over the years, however, the phrase has been taken to mean that the state cannot prefer one religion over another.  Meaning, you can’t create opportunities for Baptists that aren’t available for Hindu’s and Seventh Day Adventists.

Others less tolerant of religious expression have argued that the “establishment clause” does not simply require the government to treat all religions equally but actually prohibit any appearance of state support of religion.

That is the position the school district appears to be taking in the case.

The school districts argued that if a coach, while acting in their capacity as a coach, were allowed to take a knee and pray, it would create the appearance that the school itself favors one particular religion.  Any kind of prayer in front of students, they argued, creates a subtle pressure for students to participate or agree.

Kennedy’s layers countered that a brief, silent prayer, even on a knee, is personal religious expression similar to wearing a cross, headscarf, or yarmulke.  Those forms of expression are indisputably protected by the First Amendment.

Kennedy’s lawyers argued that personal expressions of faith do not create pressure for observers or students because no reasonable person would see a football coach on a knee in prayer and conclude the public school for whom he worked was endorsing that coach’s religious beliefs.

The Court acknowledged that the outcome in this case would have implications for other public employees.

Throughout the arguments, the Court and lawyers wrestled with the question of whether the school district should be permitted to fire  a lunchroom monitor for bowing a head in prayer.  Presumably, students would observe that as well.

One of the justices seemed to lament the opportunity the school district lost to teach students about the need to make room for the religious beliefs of individuals without imposing those beliefs on others.

Joe Kennedy wants to coach football again.  But not at any cost.

Now, the Ninth Circuit Court of Appeals will determine whether there is room in public schools for coaches who make public, personal expressions of faith.

Whatever decision they reach, an appeal is likely.

Stay tuned to FPIW.org for updates on this case and all the other issues affecting your religious freedom.

In Defense Of Bernie Sanders

When Doctors and Judges Turn Murderous
Scroll to top