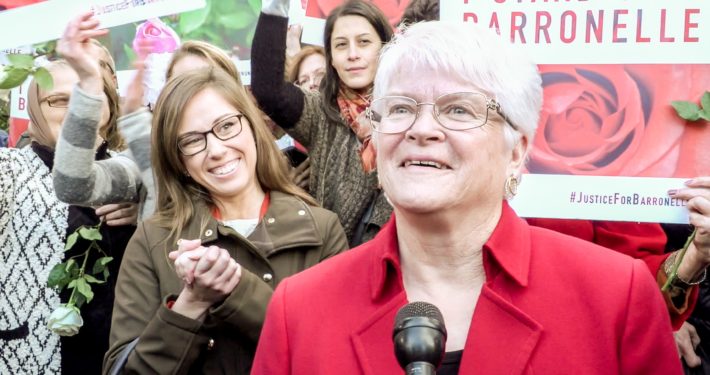 Though it wasn’t surprising, it is still disappointing.

Barronelle Stutzman is a florist in eastern Washington who told long-time customers that she could not decorate their same-sex wedding in 2013.

Despite the fact that she has employed people who identify as gay and is happy to sell flowers (including wedding flowers) to same-sex couples, she stated that she could not be the florist for their wedding because of her beliefs about marriage.

Washington State’s Attorney General, Bob Ferguson, initiated legal action against the grandmother, claiming that it was illegal for her to opt out of the event if she was willing to provide floral services for other weddings.

Today, in a unanimous decision, the Washington State Supreme Court ruled that Washington State can force businesses owners to participate in events and communicate messages they object to as a matter of conscience.

This is a radical decision from an increasingly extremist Supreme Court that has also found reasons to find charter schools unconstitutional and claim jurisdiction over how the legislature funds education.

The implications of this ruling should be concerning to everyone in Washington State, regardless of how you feel about same-sex “marriage” or your willingness to provide professional services for causes you personally disagree with.

Until five years ago, it was widely understood that individuals could choose for themselves which causes or messages they supported.

The addition of sexual orientation to some state’s non-discrimination laws combined with the redefinition of marriage has triggered a signification change in how progressives view the First Amendment.

Non-discrimination laws—which were intended to prevent businesses from having signs that say “Whites Only,” “No Jews,” or “No Mexicans”—are now being interpreted to reach far beyond their original scope.

When it comes to sexual orientation, however, what constitutes “discrimination” has been widely expanded.  As a result of this ruling, if you are willing to decorate for any wedding, you must decorate for every wedding.

This is true even if you are happy to provide service to people who identify as gay in every other context.

It is truly unprecedented.

The good news is that Mrs. Stutzman is expected to appeal this decision to the Supreme Court of the United States, where it is thought there is significantly more support for civil liberties.

The bad news is that she was sued in her personal capacity as well as her business capacity, which means she stands to lose her home, retirement, and business because of her convictions on this issue.

All people of good will should condemn this decision and do what they can to see that it does not stand.

This is not a gay or straight issue.  This is a freedom issue.