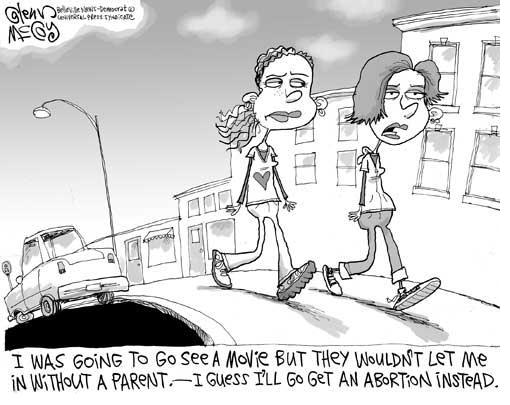 Last Wednesday’s hearing on Senate Bill 5320 (Viewable here on TWV), parental notification in cases of a minor seeking an abortion, was relatively staid affair where opponents of parental notification argued that, while a minor cannot get a tattoo, visit a tanning salon, nor drink or smoke legally, and while parental consent is needed for every other simple medical procedure or exam, somehow teenage girls in crisis should be trusted to make their own medical decisions about their pregnancy.

They painted a world where parents are at best an obstruction to unfettered abortions and at worst are waiting at home to abuse the young girl physically and psychologically.  Throughout the room was a lapel pin “Trust Women,” while seemingly lost on opponents of parental notification is the fact that half of all parents are women.  What women are young girls to trust?  Evidently not their mothers.

That is the world the pro-abortionists in the room represented, a world where we teach our adolescents that parents are non-essential and simply obstacles to be deceitfully worked around; a world where in issues of pregnancy if not tanning, drinking, smoking, tattooing, and voting the teen is completely capable of making mature, wise decisions.

On the other hand, supporters of parental notification and SB 5320 view the world very differently.  In our world parents are not the enemy but the ones who know their children best and most often have their best interests at heart.  Parents are the ones who in every other facet of life the state trusts to have the right information and make the best decision for the child.  Parents are the ones who can guide a young girl in crisis through the emotional and physical minefield of pregnancy and the results of whatever decision they choose to take together.

The world supporters of SB 5320 described is one where the science proves and the state and courts agree that the adolescent brain is not fully developed and is not fully capable of making clear, rational, choices.  That is why sentencing guidelines for juvenile offenders are different than those for adults.  Because in every other area except for teen pregnancy the state has recognized that adolescents are different and cannot be held to the same standard as adults.

Supporters of Parental Notification and SB 5320 described a world that God created, where life is precious and the family is the first society.  A world where parents have God-given authority and responsibility to raise and nurture their children.

The only question that remains from last week’s hearing is, “Which world will you choose?”

Everything You Need to Know About Neil Gorsuch
Scroll to top