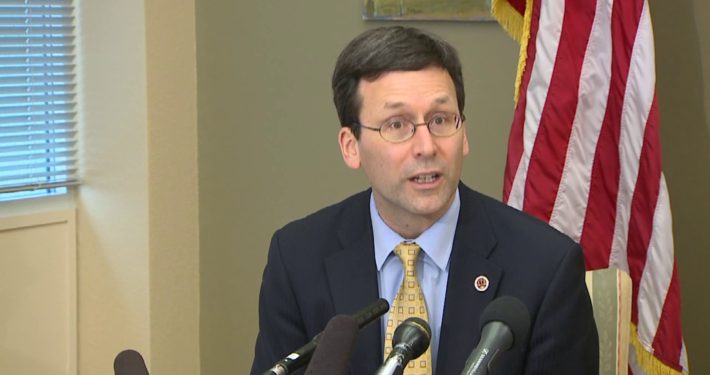 Yesterday, Barronelle Stutzman, the florist from eastern Washington, had her day at the Washington State Supreme Court.  She argued that the First Amendment’s protects her right to choose which messages she communicates with her art and which events she chooses to participate.

On the other side, Attorney General Bob Ferguson argued that, “The state’s interest overrides constitutionally protects individual rights”.

In addition to being alarmed that the Attorney General believes the state’s interest always override the interests of individuals, there’s something else you should be concerned about.

As has been customary at every hearing involving this case, Mr. Ferguson sent a fundraising email to his list of supporters immediately after walking out of court.  Here is what he said.

Three years ago, a florist in Richland refused to serve a gay man who wanted flowers for his wedding.

That’s discrimination, pure and simple. If a business provides a service, it must provide that service equally and cannot discriminate.

This morning, I argued before the state Supreme Court in support of our state’s anti-discrimination laws. Here in Washington, it’s against the law to discriminate against people based on their sexual orientation. Just like a restaurant owner can’t refuse service to me because I’m Catholic, a florist can’t refuse service to a same-sex couple because of their sexual orientation.

We need to make it clear that discrimination has no place in Washington. Our laws forbid it, and we will enforce those laws.

The fight for our rights, for equality, and for justice continues. Thank you for standing with me.

There are a couple problems with the email.

In the first sentence, he lies. I don’t use that term lightly, but at some point people no longer deserve the benefit of the doubt.

Moreover, during oral arguments yesterday, it was repeatedly emphasized that she was happy to sell them pre-arranged flowers, vases, or anything from the store that they would want to use for their wedding.  She just wasn’t comfortable being part of the event and decorating custom arrangements that she felt would express her personal support for it.

But even if he had communicated the facts of the case honestly, his instincts to turn to fundraising immediately after walking out of the courtroom speaks to what this case is really about: politics and money.

One of the worst kept secrets in Washington State politics is that Bob Ferguson wants to be the next Governor.

As such, the only person who even theoretically benefits from this lawsuit is Bob Ferguson.

Indeed, even if the state wins this case, no same-sex couple will have access to wedding flowers that otherwise would have been forced to suffer through a poorly decorated wedding because everyone knows lots and lots of florists are happy to do the requested work. The market will provide the solution even if one particular business does not feel up to the task.

All the while, Barronelle Stutzman stands to lose her home, life-savings, and business if she loses.

So no one really wins anything and someone stands to lose everything.

But Bob Ferguson makes money for his next campaign.

This case is a great example of why so many people distrust government and those in it.  It demonstrate that in many cases, the only people who benefit from government action are those in power.

They misrepresent the truth  and pretend to do something meaningful when the only real impact is a loss of freedom.

If Bob Ferguson has wondered at any point over the last week how people could possibly vote for someone like Donald Trump, he need look no further than his behavior in this case.

Barronelle Stutzman Has Her Day In Court