For reasons of personal safety and livelihood, I can’t tell you who I am. But I can tell you this much: I’m a progressive feminist who has spent years working on the front lines of the left. I have opposed conservatism my entire political life in the most strident of terms; under other circumstances, I wouldn’t admit to even reading this site.

Yet, I’ve known for a while that questioning the official narrative of transgender activism (a cause championed wholeheartedly and without question by nearly everyone on the left) can get you blacklisted from media and political work.

People I thought of as friends and colleagues have turned into thought police, and anyone who dares to question the official line is intimidated into capitulation and silence — or forced to find another line of work. So I’m writing you like this, here, to ask you to think carefully about the public safety impacts of the story you’re about to read.

Both the details of the event and the larger circumstances matter, because the truth matters. 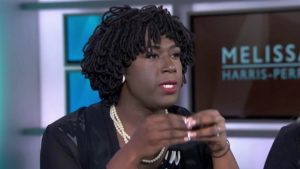 Cherno Biko is a transgender woman. As Co-Chair of the Young Women’s Advisory Council for New York City, Biko is deeply embedded in a movement that strongly invests in forcing all public speech to contort itself around the idea that transgender women, who are biologically male, are instead biologically female and always have been.

In New York City, where Biko lives, it is a crime, punishable by a fine of up to $250,000, to intentionally refer to a transgender person in a way that causes offense.

Transgender ideology itself hinges on the assumption that a person is transitioning to live under gender roles normally prescribed to the opposite sex. The public has been led to believe that ‘transgender’ is another word for ‘transsexual’, someone who has an overwhelming compulsion to have a full surgical transition. But this is false.

During what started as consensual intercourse, Biko told the victim – whom we’ll call “J” – that he wanted to get “J” pregnant with his children. Biko then removed his condom, and continued the act over the victim’s objection. (“J” is a transgender man, but otherwise biologically and anatomically female.)

“To be honest, I’m relieved that I can now speak directly to these issues, from the perspective of both a victim and abuser,” Biko wrote afterwards. This expressed relief was short-lived. That sentence was removed, and, as of July 28, read as follows:

“As I began to learn more about consent I discovered that under [New York State] law it is impossible for a person who is mentally unstable to give consent. I struggled with this idea because it leaves no space for varying degrees of mental illness or for people who experience mental illness but have never been diagnosed like myself.”

In a space of days, Biko moved from admitting culpability for a serious crime to playing the victim.

In this case, a biologically male person raped a biologically female person, for the purpose of forcible impregnation. Even Chase Strangio of the ACLU, notorious for stating that there’s no such a thing as a male or female body, knows what kind of bodies I’m talking about when I say that someone with a penis pulled off a condom and tried to get someone else pregnant during heterosexual intercourse. What types of bodies get pregnant? Everyone knows.

Transgender dogma is such that Biko’s victim, “J,” has been conditioned to believe that, although they were born female, they have acquired male privilege over biologically and anatomically male individuals like Cherno Biko, and are therefore expected to protect them in cases such as this.

But even if “J” pressed charges, knowing the nature of laws regarding transgender speech in New York City, how could a prosecutor clearly describe what happened to a judge and jury? Transgender individuals often strongly object to using either medically accurate terms for their body parts or even veiled references such as “male genitalia.”

Even in the event of a conviction, presuming that Biko’s official documents inaccurately list his sex as female, New York State laws would likely require housing Biko in a female correctional facility.

According to the Correctional Association of New York, of the women in prison in the state, “three-quarters have histories of severe physical abuse by an intimate partner during adulthood, and 82% suffered serious physical or sexual abuse as children.” Is a person with intact penis and testes and a penchant for forcible impregnation really a suitable cell or shower mate for the already-abused women held in New York State facilities?

In the likely event that nothing changes and Biko continues to roam free, what will this mean practically? The victim of Biko’s crime admitted that Biko was unable to pay $80 for potential HIV exposure. What if Biko were to lose his housing and require the services of a homeless shelter? The Obama administration has declared that all formerly single-sex crisis shelters must accept individuals on the basis of gender identity, and has made clear that questioning such claims opens shelters to civil rights complaints.

Is a person with intact male genitalia and a penchant for forcible impregnation a suitable women’s dormitory resident, when the other women there have nowhere to go?

Men can be raped, too. Yet, a male body cannot be subject to impregnation.

These simple, commonly-understood facts have been wholly uncontroversial until recently. When and why did it become taboo to look at a situation like this and accurately describe it?

When transgender woman Dana McCallum raped his wife after being served with divorce papers, everyone seemed most interested in making sure the word “male” was never attached to the perpetrator. Former colleagues issued no statements and McCallum’s writing was scrubbed from the feminist media site where it had previously appeared.

Will Biko’s name and work disappear just as quietly? Is that even possible, given his status as a media darling?

Maybe “J” is worried about Biko’s well being. Though maybe “J” also knows, like I do, that speaking out against prominent transgender activists often brings an avalanche of death threats, rape threats, and threats of economic retribution.

Will the transgender movement ever wake up to the consequences of the stifling silence they’ve created, now that a self-described rapist has represented them twice this year at the White House?

To date, the transgender community doesn’t seem to want accountability. They want problems to go away as quickly and quietly as possible. When Allison Woolbert was outed as a former child rapist under Woolbert’s birth name, Dennis, the transgender community acted largely as if it had never happened. Woolbert’s prominence in anti-violence initiatives prompted very little soul-searching.

When Chad Sevearance-Turner, the lead organizer of the Charlotte, North Carolina, effort to end sex-segregated private spaces in the city, was revealed to be a registered sex offender, he, too, was simply quietly retired from that campaign, as reported in the Charlotte Observer.

According to the transgender movement, the State of New York, and the Obama administration, Biko is a woman, who can be in a state of undress anywhere that any biological female can be in a state of undress. According to gender identity laws ending sex-segregated private spaces, even Sevearance-Turner has only to declare himself a woman to be allowed to undress in female-only spaces.

In New York City, where Biko lives, it’s a potential violation of the human rights laws to publicly mention a transgender person’s former name. Will Biko be able to change his name again and claim this protection?

Gender identity policy changes that go beyond issues of preventing housing and employment discrimination aren’t mainly (and never were) about bathrooms. Bathrooms are simply where the legal definition of “same-sex” collides most often with the paths of the general public.

But promoters of the transgender policy agenda insist that it’s wrong to discuss the possibility that predators could misuse its proposals. They’ve done this so effectively within the policy and media elite that the only questions now come from the right.

They’re the same people who will read this article about a brutal rape, and complain that the real violence is that Biko has been “misgendered” by being referred to as male, just so the facts could be clearly communicated.

This doesn’t have to be a partisan issue. Let’s just promote common sense.