The battle over the Washington bathroom rule repeal just got a whole lot more interesting.

Transgender activists have sounded off in recent weeks claiming that they are being unfairly characterized by those concerned about locker room privacy and safety following the launch of the Just Want Privacy campaign.  Proponents of repealing the open bathroom rule have repeatedly said that their concern is not that the transgender community is going to harm women and children, but that it creates opportunity for those who would seek access to places they don’t belong.

Much of this debate has taken place in social media.

Seattle-based transgender rights activist Johanna Wolf has been among the most vitriolic in her responses to privacy activists, claiming that it’s only their “hatred” and “bigotry” that is trying to keep her and others out of the locker rooms and showers.

Recently we have discovered that Johanna used to be a man, Jonathan Adrian Wolf, who is a sex-offender convicted of raping a 20-year old deaf girl in Nebraska in 2006.

Why is this relevant?

Because a sex-offender is now seeking access to a woman’s locker room through this open bathroom policy.

Wolf, now identifying as a woman (view the name change document here), appears to be shocked and offended that people in Washington want to take away “her” rights to use the locker room and shower of “her” choice (caution: strong language): 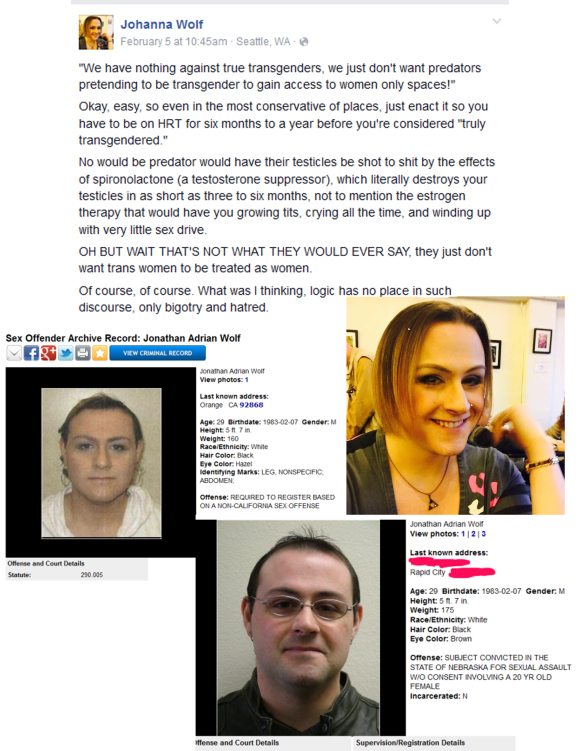 Obviously, it remains true that not everyone who experiences gender dysphoria is a sex-offender or wanting to do harm.

But the fact is, this new rule would create liability for businesses who would seek to intervene in cases like this.

Despite maintaining residency in the Seattle-area, Wolf does not currently appear as a registered sex offender in the online sex-offender registry operated by the Washington State Department of Corrections or the database operated by King County.

There are already many cases of men impersonating transgender women to gain access to private places.  Now we know there are convicted sex offenders seeking access to women’s bathrooms under the same rationale.

Just in case you needed another reason to be concerned about this new bathroom rule, now you have one.

Let us know what you think about this in the comments section, below.