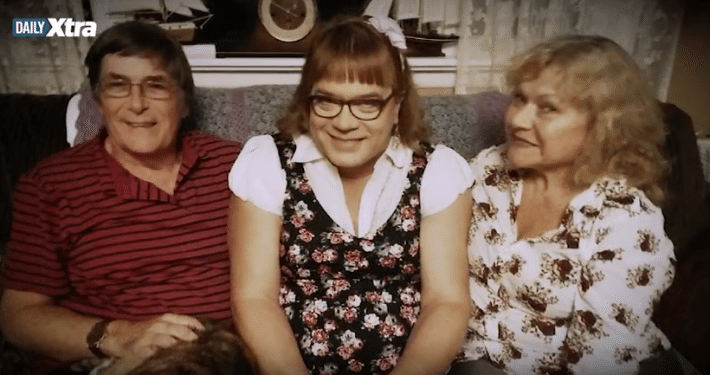 Yesterday, the YMCA of Pierce and Kitsap County reversed course and instituted a transgender bathroom policy.  A few weeks ago, they covertly passed the policy without informing their members or training their staff.

After public outcry, they reversed the policy.  But yesterday, they reinstated it.

Proponents, like Governor Inslee who tweeted his support of the new policy shortly after it was adopted, believe it’s a necessary step toward tolerance and inclusion.

Whatever the rhetoric and whatever your perspective, the fact is, the new policy will allow a man who identifies as a woman to walk into the women’s locker room in the YMCA and undress in front of whoever may be around.  If you object, the management of the YMCA will do nothing about the naked man in the women’s locker room but more likely confront you about your bigotry.

For good reasons, people are concerned.  If you are part of the YMCA of Pierce and Kitsap Counties, you should probably take a few minutes to have a polite conversation with them about this.  Silence is agreement.  You can reach them at (253) 534-7800.

However, as we look at this particular case, its a good idea to look beyond the naked man in the bathroom and wrestle with the premise involved; the idea that we all get to define identity in the way that makes us most happy, regardless of what reality is, and everyone around us is obligated to participate in our fantasy.

Where does it end?

We all laughed when it was revealed that Rachel Dolezal, the head of the NAACP in Spokane, WA, was actually white. But since it was on the heels of the Bruce/Caitlyn Jenner story, a lot of people said, “why not?”.

We squirmed a little when we read about members of the transabled community; perfectly healthy people who desire to lose their sight, become paralyzed, or have a limb removed so they can live their true identity as a disabled person.

This week, it got even stranger.

A fifty-two year old father of seven has left his family to live his true identity as a six year-old girl.  Transgender and transage.

One doesn’t have to be creative to imagine the challenges involved in letting people choose their own age.  I’m decades away from retirement, but if I can declare myself to be 75 and start receiving social security benefits, why not?  Have a problem with the insanity defense?  Just wait for the, “You can’t try me as an adult for that crime, I’m only seven!” defense.

Should elementary schools be forced to allow grown men to enroll if that’s what makes them happy?

Of course I am skeptical of the trans-phenomenon entirely.  In one sense or another, we all wish reality was different than it is, but that doesn’t mean we can change it. But I know others feel differently.

In an attempt to see if there is a limit to what LGBT advocates will advocate for when it comes to trans-activism, I contacted Dominic Holden, an LGBT advocate and writer for BuzzFeed who previously wrote for The Stranger in Seattle, via Twitter.

When I asked him if he had any objection to people choosing their own age, he couldn’t think of a reason to be opposed. Furthermore, he felt that it would be a problem if schools or employers refused to acknowledge their identified age. 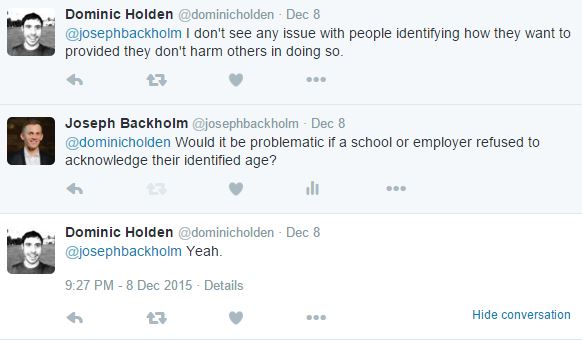 I was, and am, legitimately surprised.  He’s not a dumb guy and in the LGBT activist world he’s quite mainstream.

On the other hand, if you’re willing to let a man undress in front of girls in a locker room, maybe enrolling him in kindergarten isn’t that ridiculous.

When pushed, Mr. Holden was unable to identity any illegitimate ways one could “identify.”

And that’s how it usually goes.

One of the first plays in the progressive playbook is, “Be offended by questions that challenge your premise because you are relieved of the need to answer fair questions if they make you sad.”

So here we are.

We are pretending that mothers and fathers don’t matter.  We are pretending that men can become women because they want to. We are being told that it shouldn’t concern you if male genitalia is being displayed in the women’s locker room at the local YMCA.  And for some advocates of “trans rights”, choosing your own age seems to be just fine as well.

Where does it end?  No one seems to know.

They seem unwilling to immediately defend the theoretical person who identifies as a plant.  But, that’s almost certainly because they haven’t sat down and heard the stories of heartbreak from the man who knows deep down, that he’s a fern.  Who are you say his struggle for acceptance isn’t real?

This should be fun.