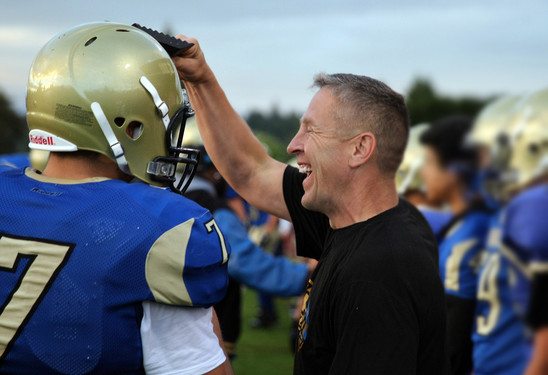 A standoff is scheduled to begin tonight at a Bremerton High School Football game.

What kind of a standoff?

A standoff between a former Marine and high school football coach and the school district he coaches in.

For the last seven years, Coach Joe Kennedy has walked to the 50-yard line and prayed after every junior varsity and varsity high school game at Bremerton High School, a ferry ride away from Seattle.

At the close of his very first game, Kennedy waited for the players and other coaches to clear the field. After his official coaching duties had ended, he walked to the 50-yard line, took a knee, and prayed, quietly but audibly. After a few games, some students asked what he was doing.

“I was thanking God for you guys,” Kennedy recalls telling his players. “Then a couple said they were Christians and asked if they could join. I responded, ‘It’s a free country, you can do whatever you want to do.’”

So some of them joined him.

As Kennedy’s own players made a practice of joining him, players from the opposing team would sometimes join in as well.

There’s nothing to suggest that players who don’t share Kennedy’s faith have felt alienated, ostracized, or otherwise excluded; just a former Marine, giving his time to invest in the next generation of men and exercising the freedoms he risked his life defending.

As Bremerton captain Ethan Hacker, a self-described agnostic, told the Seattle Times, “It’s about unity.  We can be mad at each other all we want during a game and get upset, but once the game is over, that all goes away. What (Kennedy) does brings us all together no matter how much we despise each other.”

He neither requests, encourages, nor discourages students from participating in his personal prayers, or coming to where he prays. His prayers neither proselytize nor denigrate the beliefs of others. And he has never received a complaint about his post-game personal prayers.

Under these circumstances, there is no constitutional prohibition against Coach Kennedy’s private religious expression.  The fact that students voluntarily join him should not make an otherwise constitutionally protected exercise of religion suddenly illegal.

Regardless, in September, the Superintendent of the Bremerton School District wrote a letter to coach Kennedy telling him that his practice of praying on the field after the game had to stop because it “expos[es] the District to significant risk of liability.”

On Wednesday, Coach Kennedy held a press conference with his attorney from the Liberty Institute to announce that he did not plan to stop praying.

Will it cost him his job?  Maybe.  That seems to be the world we live in now.  But if enough of us say “enough is enough”, we could stop that from happening.

Around the state, school districts are enacting policies that would allow a boy to go into the girls locker room if he believes he is a girl.  In Seattle, schools are giving girls as young as 11 IUD’s without their parent’s awareness.

But we’re concerned about the liability from a post-game prayer?

Tonight at 7:00, Bremerton High School is playing its Homecoming game against Centralia High School.  After that game, Coach Kennedy plans to say a prayer on the field as he has for so many years.   Maybe you should join him and bring some friends with you.  Watch a little football, show your support for his courage, stand-up for the first Amendment, and then say a prayer with Coach Kennedy.

When the fact that a football player might be encouraged to thank God for their life and abilities because of the example of their coach is more concerning to us than the fact that we will allow naked boys in the girl’s locker room if he says he’s a girl, it seems like it might be time to pray.

U.S. House to Vote on Defunding Planned Parenthood on Friday
Scroll to top