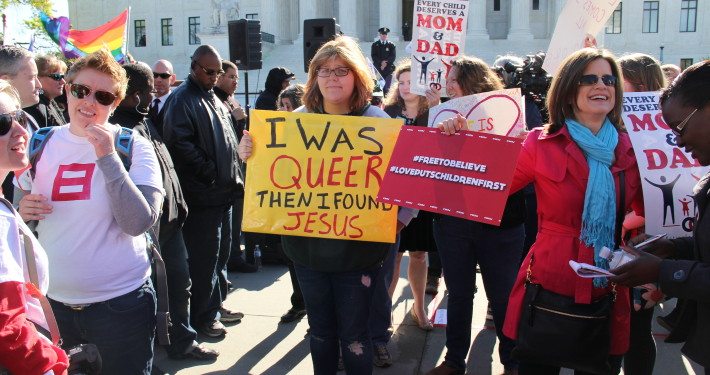 While the Supreme Court was debating the definition of marriage inside the building, outside on the sidewalk a similar — but much livelier —  debate was taking place. 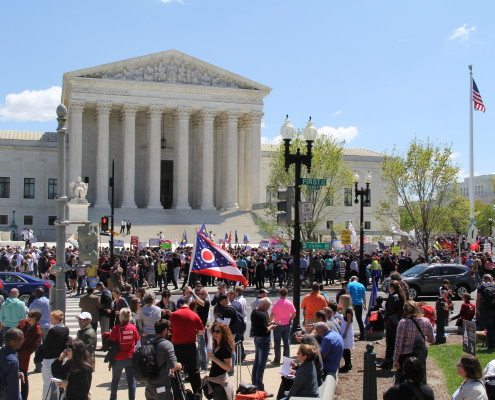 The scene outside while the Supreme Court was deliberating.

Dueling rallies were organized at the foot of the Court steps in which speakers from both sides, made arguments to partisan crowds for more than two hours.  On the edges of the gathering, street preachers and the Westboro Baptists dueled for attention with drag queens.

In one sense, the gathering was exactly what America is supposed to be.  People gathering peacefully to advocate for their position.  But in another sense, the subject of the debate demonstrated how much is wrong. 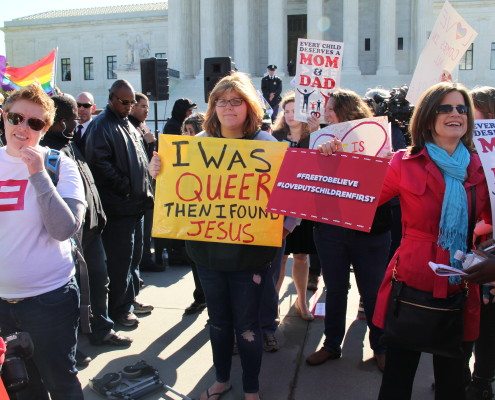 A woman defends marriage and tells her story.

Throughout the gathering, debates erupted spontaneously.  Most were respectful and all were passionate.  There is no report on how many minds were changed. 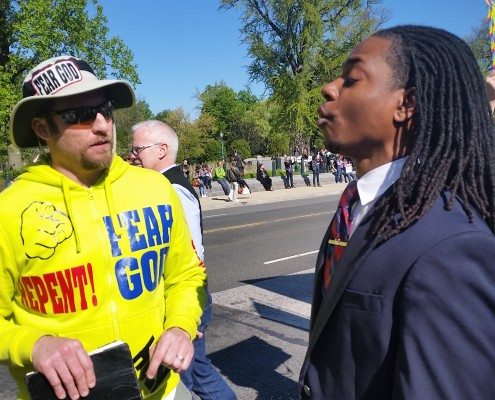 At the rally in support of marriage, members of Congress were joined by activists and organization leaders from around the country.  Congress members speaking in support of real marriage included Rep. Steve King of Iowa, Rep. Jodi Hice of Georgia, Rep. Tim Huelskamp of Kansas, Rep. Louie Gohmert of Texas. All spoke about the rights of states to define for themselves what marriage is through the political process.

Kassie Dulin, of Liberty Institute, talks about the need to preserve the definition of marriage and protect religious freedom.

As each pro-marriage speaker was introduced, boos could often be heard from those within ear shot who did not appreciate the message.  The harshest response may have been reserved for Elizabeth Santorum, the daughter of Sen. Rick Santorum, who spoke in support of marriage on behalf of her father.

Only a few feet away, a rally in support of redefining marriage was taking place. They spoke a lot about equality and how America is ready to have same-sex marriage imposed upon it because, “Love is love.”  Hopefully, the arguments being considered inside the courtroom were a bit more thoughtful.

The religious nature of the arguments for redefining marriage was noticeable. 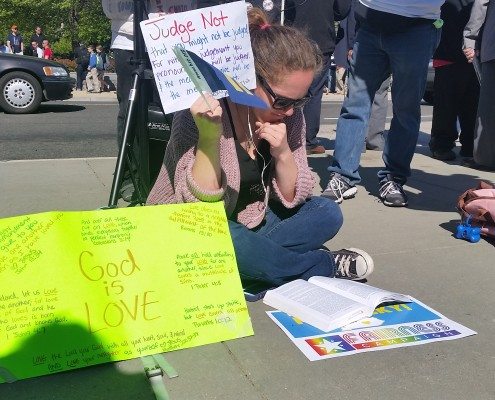 This woman sat in front of a street preacher appearing to make a biblical argument for why marriage should be genderless.

Some of the people seemed eager to inject their religious beliefs into the debate marriage, while others seems more concerned. 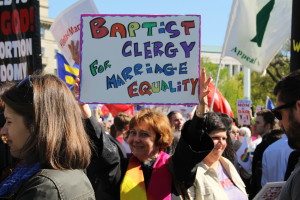 While several pastors defended God’s definition of marriage, this clergywoman did not.

This lady should have words with the lady above.  So much imposition of religious morality going on.

Shortly before noon, a young man wearing a t-shirt with an equals sign and carrying a large flag with the same symbol, looked at his watch and commented to the girl next to him that, “I only think they’re paying us until noon.” When I asked him how much they were being paid, he just laughed.

For the left, activism is also an industry.

Maybe the most memorable scene of the day involved a choir, of sorts, involving…wait for it…the Westboro Baptists and a bunch of gay activists.

The Westboro Baptists brought a sound system with them playing a number of popular songs with the lyrics rewritten to be…shall we say, politically incorrect.

At one point, their revised version of the pre-teen girl hit “Let it Go” was being sung by a couple of the Westboro Baptists until a group advocating for the redefinition of marriage decided to drown them out with the real lyrics.  As each side attempted to sing louder to make their voice heard above the others, there came a moment when the singers seemed to forget they hated each other and simply allowed themselves to enjoy the fact that they were singing together.

A glimmer of hope in a scene that otherwise gives a lot of reason to be concerned.

Dhimmitude in America?
Scroll to top