On Friday afternoon, Arlene’s Flowers and Barronelle Stutzman were in court responding to lawsuits from the Attorney General and the American Civil Liberties Union (ACLU) for declining to decorate for a same-sex ceremony.

Supporters of Arlene’s Flowers file into the Benton County Courtroom

The courtroom was packed with members of the public, most of whom carried little red flowers indicating their support of Barronelle Stutzman and Arlene’s Flowers. Those who couldn’t fit inside the courtroom waited in the hallway and held signs outside the courthouse demonstrating their opposition to the lawsuit.

The court heard arguments on two separate motions, but no decision was made. Judge Alex Eckstrom promised a written decision but did not give a date.

The trial is scheduled to begin March 23rd.

Before every trial, lawyers file pre-trial motions that decide a variety of issues before a trial takes place, or, as in this case, could eliminate the need for a trial altogether.

The first motion was brought by Arlene’s Flower’s lawyers who argued that the lawsuit should be dismissed because the entire incident was essentially a miscommunication. During depositions, the customers stated that the only thing they wanted was to purchase twigs, sticks, flowers, and vases so they could decorate themselves. Mrs. Stutzman has stated consistently that if she had known that was all they wanted, she would happily have sold those things to the customers, and remains happy to do so in the future. But she was under the impression they wanted full wedding services, which she did not feel she could do.

The summary judgment motion brought by the government and ACLU argued that the judge should rule in favor of the state without a trial because by acknowledging that she is unwilling to provide full wedding services for same-sex ceremonies, Arlene’s Flowers has admitted discriminating based on sexual orientation.

In response, Arlene’s Flower’s argued that she did not and does not discriminate on the basis of sexual orientation. They cited the fact that she had a warm, friendly, customer relationship with the plaintiffs for nine years prior to the incident, while knowing they were in a same-sex relationship. They argued that her willingness to serve gay people generally, and even sell goods for a same-sex ceremony, indicates that she does not violate on the basis of sexual orientation, only that she is unwilling to celebrate a same-sex ceremony.

Lawyers for Arlene’s Flowers also noted that Barronelle Stutzman has been the target of  dozens of profanity laced threats, including multiple death threats. No such record of attacks directed at the plaintiffs could be found.

For observers, this fact raises the legitimate question about who is more likely systematic discrimination and threats; the person in a same-sex relationship or the person unwilling to celebrate it.

Here are a few personal observations from the hearing.

First, this is a very important case for the Attorney General. The Attorney General’s office has assigned their best lawyers, including Solicitor General Noah Percell to argue one of the motions on behalf of the government. Typically, the Solicitor General does appellate work. But in light of the profile of this case and its importance to Bob Ferguson’s political career, he is already heavily investing the time of his best lawyers in the case.

Second, this is a very challenging assignment for Judge Eckstrom. Only a few months ago he was a prosecutor and has only recently been appointed to the bench. The record in this trial already includes thousands of pages of motions and documents and he does not even have a clerk to help write opinions or do research. While it’s difficult to know the significance of this fact, in three hours of argument he did not ask a single question challenging a legal argument by lawyers for the ACLU or the government. While respectful, he challenged the lawyers of Arlene’s Flowers on several occasions.

Third, this case is now much bigger than the people involved. Robert Ingersoll, the long-time customer and one-time friend of Barronelle Stutzman, on whose behalf these lawsuits have been filed sat quietly behind his lawyers. He stared at the floor while lawyers for Barronelle Stutzman read from his deposition when he talked about how warmly she had always treated him and how she cared about him as a person. He barely even looked at the lawyers who were supposedly arguing on his behalf.

You couldn’t help but get the impression that he doesn’t like being the tool political forces are using to make an example out of what he knows to be a very good woman. Pray for him. 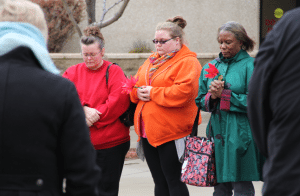 This story is far from written and because God is good and much smarter than we are, a lot will happen we can’t predict.

Thank you to those who showed up to support her. Please continue to call the Attorney General at 360-753-6200 and email your legislators  about this issue.

If you weren’t able to make it to the hearing, there will be more chances. This case will likely be in court for years and every time Barronelle is drug into court because of her convictions we need to be there standing with her. Bear one another’s burdes, and thereby fulfill the law of Christ. Gal 6:2

We are all Barronelle Stutzman.