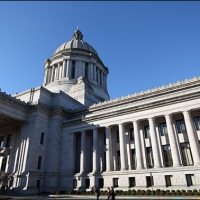 Today in Olympia, the House Health Care and Wellness committee will hold a hearing on HB 2148 which is a new version of an old idea to require every insurance policy to cover abortion.  The hearing will be at 1:30 in House Hearing Room B in the John L. O’Brien building on the capitol campus.

It is open to the public or you can watch it online here.

This bill is uniquely bad because it would take away the freedoms of millions of Washington citizens while providing no tangible benefits to anyone.

Proponents of the bill say it is necessary to require every insurance policy to cover abortion in order to ensure that women won’t be denied abortion insurance.  The problem is, that’s not a problem.

Not a single person, in two years of legislative debate over this proposal, has ever testified that they had a trouble getting abortion coverage with their insurance policy.  This is like a bill mandating adequate cloud cover in Seattle.  Really, we’re good.

When first introduced two years ago, proponents of the bill claimed a mandate was necessary to make sure people who wanted abortion coverage within the Obamacare exchanges had options.  Federal law allows states to opt-out of providing abortion coverage through the exchanges (twenty-one states have done so) and also prohibits the use of federal dollars for abortion.

The abortion industry said they were concerned that these factors would result in exchanges that offer coverage for everything but abortion.

However, when the policies were announced last year, the result was that every plan and every provider under the exchange covered abortion. Crisis over, right?

According to an email from Planned Parenthood late last week, this bill is still necessary because of “confusion” over which policies cover abortion.

And for three weeks there was confusion…kind of.

When the plans were first announced, one provider, Group Health, said their four plans would not cover abortion. Instead, they were just going to offer them for free in their clinics to those who had their coverage.

This result was outrageous to abortion industry advocates who somehow managed to argue that giving away free abortions represented a “barrier to access“. Indignation was summoned and press releases were issued.  When the dust had settled, Group Health had changed their mind and now offers abortion coverage.

That means that every plan within the exchange and every company in the private market offers abortion coverage.

Still, they argue that brief three week period, in which four of the thirty-one plans under the Obamacare exchange were going to give abortions away rather than insure them, requires the state to outlaw the sale of insurance policies that don’t cover abortion.

In reality, it appears their frustration is not that women don’t have the option to buy abortion insurance, but that some of them don’t.

As Planned Parenthood said in an email rallying support for the mandate, “some women are buying insurance plans today that don’t include fair coverage for all their pregnancy options – including abortion.”

There are two reasons this might bother you. Either you dislike consumer choice generally or you don’t think women are smart enough to know how to buy the kind of insurance they want and you feel the need to protect them from their own ignorance by making it impossible not to buy abortion coverage.

Abortion industry advocates are also hoping this bill would solve the “problem” of employers buying plans for their employees that do not cover abortion.  Employers would lose that freedom if this bill became law.

Companies like Hobby Lobby, private universities, faith-based non-profits, and even churches would be forced to pay for abortion coverage even if it violates their conscience, their faith, or even the mission of the organization itself.

Can you imagine requiring an organization whose mission is to save babies from abortion to pay for abortion through their insurance?

If you can’t be in Olympia today to testify at the hearing, you can call your legislator through the legislative hotline at 1-800-562-6000 to share your thoughts on HB 2148.  If you call the hotline, the friendly operator will tell you who you are represented by when you provide your address and deliver a brief, respectful message from you.

You can also click here to email your legislators.

Remember, in any communication with your legislators, it isn’t important to be brilliant but it’s very important to be heard.  Two sentences stating your position is enough because it lets you be counted.  They assume every phone call and email represents a bunch of voters who agree with you.

So do your part and then encourage a friend to do the same.

Your contribution of $5 of more allows us to fight for conscience rights.

There are Phil Robertsons Everywhere