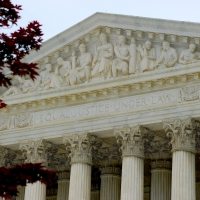 By now you know that the Supreme Court struck down section 3 of the federal Defense of Marriage Act (DOMA) in the case United States v. Windsor.

While this was one small step for the Supreme Court, it represents one giant leap for make-it-up-as-you-go judicial decisions and exposes the fact that the Supreme Court is not inoculated from the hyper-political, cultural debate surrounding marriage.

Proponents of natural marriage feared that the Supreme Court would issue a Roe v. Wade of marriage by declaring a constitutional right to marry someone of the same gender and removing the debate from the political process. In some ways, however, this case could be worse than Roe because of its incoherence.

Typically, the Supreme Court gives a real life, legal reason for its decisions. But in this case, the Court did what all good politicians do — use a large number of words to say nothing useful all in the name of getting what you want.

Here are the legal arguments the Court didn’t use to support their conclusion that DOMA is unconstitutional.

First, the court refused to say there is a constitutional right to marry someone of the same gender.  This is significant because the primary political argument of those wanting to redefine marriage is that “marriage equality” is a constitutional right.  Even this court acknowledged that isn’t the case, though I doubt the legal reality will catch up with the campaigns any time soon.  Why let reality get in the way of a good slogan?  Strike one.

Third, the court did not say DOMA violates the Fifth Amendments due process clause.  Due process is the idea that government can’t deny liberty without due process.   Much of the commentary about this case suggests that the Fifth Amendment is the justification the Court used, but in reality they declined to do so.  The majority acknowledged the precedent saying that due process protects substantive rights only when they are deeply rooted in our nation’s history and traditions.  That clearly excludes same-sex “marriage”, which had never existed in any jurisdiction on the planet prior to 14 years ago.

It is the opposite of a deeply rooted substantive right. Strike three.

Fourth, the court did not say that DOMA violates family law jurisdiction. The opinion begins with a red herring discussion of the fact that family law has historically (but not exclusively) been left to states.  The implication the court wanted to create is that DOMA, from its origin, was an overreach of federal power into state matters. Yet it refuses to strike DOMA down on that basis.  Why?  DOMA has never had any impact on state family law and they know that.  To the contrary, it controls only how the federal government allocates federal money and benefits when it comes to marriage, which is clearly within Congress’ power.   Strike four?

So, if there is no constitutional right to same-sex “marriage”, if DOMA doesn’t violate equal protection or due process, nor does it overreach into the state’s domain of family law, then why did they decide that it was unconstitutional for Congress to define marriage as a relationship between a man and a woman and still allow the states to do so?

Because they wanted to.

What is obvious in their language is that they like same-sex marriage. So in place of legal arguments, the Court relied entirely on its belief that their position on gay marriage is morally superior to that of Congress circa 1996.

From their perspective, DOMA must have been motivated by a “bare desire to harm,” or “to disparage and to injure.”  They further explained that its sole purpose and effect is to “impose inequality,” to deny “equal dignity,” and “humiliate.”

What more of an explanation do you need, bigot?

In the place of legal reasoning, the court effectively creates a precedent for doing whatever it want so long as it feels justified.  If you are more interested in the outcome than respecting our separation of powers, that’s precisely what you were looking for. Lawsuits claiming state DOMA’s are unconstitutional have repeatedly failed because there is no legal precedent to support their position.  However, new legal challenges to state DOMA’s are likely to ensue and we can be sure that those lawsuits will quote liberally from the majorities’ sermon/opinion in this case.

The strange scenario they left us with, in which federal tax law is now different from state to state, and where it is constitutional for a state to define marriage as a relationship between a man and a woman but unconstitutional for Congress to do the same, is the work of a political body trying to reach a political outcome.   The problem is, that isn’t what the Supreme Court is supposed to do.

All the while, they assure us that they were not trying to say that there is a constitutional right to same-sex “marriage”.

Justice Scalia’s response to this position in his dissent will close this discussion well:

“It takes real cheek for today’s majority to assure us, as it is going out the door, that a constitutional requirement to give formal recognition to same-sex marriage is not at issue here-when what has preceded that assurance is a lecture on how superior the majority’s moral judgment in favor of same-sex marriage is to the Congress’s hateful moral judgment against it. I promise you this: The only thing that will “confine” the Court’s holding is its sense of what it can get away with.”

Who to Blame for Arlene’s Flowers?

Why the Left Abandoned Religious Freedom
Scroll to top