Marriage is a Social Justice Issue

Marriage is generally thought of as a social or moral issue.  In fact, many conservatives avoid issues like marriage to focus on economic issues.  Strong families, they argue, will follow strong economies.For the leftist, they avoid issues like marriage in favor of social justice issues.  From their perspective, we shouldn’t try to force one particular value system on people because legislating morality is inappropriate. They feel time is better spent focusing on how we can practically help those in need.Whether it is the economically minded conservative or the social justice minded leftist, both would agree that practically improving the quality of people’s economic situation and eliminating the cultural barriers to their success is a higher priority than “moral struggles” over the definition of marriage.What happens then, if someone committed to not getting involved in “social issues” discovers the key to the poverty problem lies in the marriage issue. Suddenly an irresistible force meets an immovable object.That could be precisely the situation we find ourselves in.An analysis of recent census data by Robert Rector of the Heritage Foundation indicates that marriage could be the greatest single variable in the poverty discussion.According to the study, the poverty rate for families with two married parents is 75% less than the poverty rate for single-headed households. While conventional wisdom says that the real solution to ending poverty is education, it turns out that being married has the same ability to prevent poverty as five to six years of education beyond high school.

What makes this powerful relationship between poverty and one-parent households even more troubling is the fact that so many more children are being born to single women.

When the War on Poverty began in the mid-1960s, only 6 percent of children were born out of wedlock. In 2010, an astonishing 40.8 percent of all children born in the U.S. were born outside of marriage.

This is relevant to the debate over same-sex “marriage” because our view of marriage impacts how we behave with respect to it.

The  way we behave with regard to marriage has a tremendous impact on generations of people.

According to the study, almost none of the lower-income women who have a child out of wedlock feel that it is important to be married before having children. Although roughly half of non-married mothers were cohabiting with the father at the time of birth (nearly 75 percent were in some sort of romantic relationship with the father), these relationships are usually of short duration and unstable.

Those who don’t view children and marriage as inextricably linked are, unsurprisingly, having lots of children who are not raised by their parents. And as a result, many of them end up in poverty.

If we perpetuate the idea that marriage and children are totally unrelated, we should expect to see more children being raised in challenging environments.

The same-sex “marriage” movement depends entirely on convincing the public that marriage has nothing to do with children.   Instead, they argue that marriage is about the love and commitment that two people share.

While no one is opposed to love and commitment in the general sense, building an institution as significant as marriage on a foundation as feeble as the affection two people share for each other cannot work well for any period of time.

To be sure, the effort to redefine marriage is not the primary cause of single-headed households and the poverty that follows. The institution of marriage has many problems not related to its definition. Still, this would be another step toward an increasingly narcissistic view of marriage and the consequences thereof.

Still, we must ask ourselves the following: if we embrace the idea that marriage exists to satisfy the wants, needs, and desire of adults, are children more likely or less likely to end up living in a household with married parents?

And that’s why the outcome of this marriage debate matters.  If we insist that marriage has nothing to do with children, more children will be raised separate from it. And that will produce results that all of us — social justice leftists, fiscal conservatives, and social conservatives alike — will come to regret. 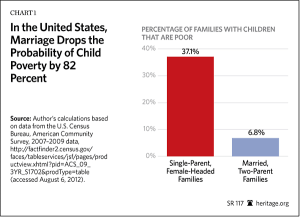