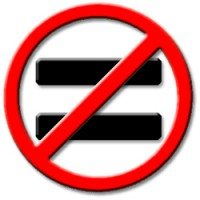 Proponents of same-sex “marriage” talk constantly about “marriage equality”.  It is an attempt to hitch their wagon to the real civil rights movement and also puts people who disagree in a position of being against equality.

What they want you to believe is that allowing people of the same gender to get married is “marriage equality”. They use the terms “same-sex marriage” and “marriage equality” synonymously and say things like, “we think any two people who love each other should be able to be married.”  We’ll call this The Beatles standard for marriage…”all you need is love”.

The problem is, even those who support redefining marriage don’t believe this.

Do you know anyone who really believes all restrictions should be lifted so any two people who say they love each other can get married?  Me either.

The discussion about same-sex “marriage” only addresses one of four limitations on who someone can marry.

That means that even if proponents of redefining marriage prevail this year, there will still be literally millions of potential couples in Washington who could come to love each other that would be denied a marriage license either because they’re too young, close relatives, or already married to someone else.

If we actually adopted The Beatles standard for marriage, because nobody’s love is better than anyone else’s love, then we would eliminate all restrictions on marriage. After all, how exactly does one go about proving that two people don’t love each other?

Still, the fact is, those who support same-sex “marriage” really just want a different kind of marriage inequality.

We may disagree on whether it is good public policy to give marriage licenses to people of the same gender, but can’t we at least be honest with what we’re talking about?

Falsely claiming the moral high ground, proponents of redefining marriage put their opponents in the position of being against equality.  Pot meet kettle. But this tactic is consistent with a general pattern of framing the debate as good people v. bad people.

If your primary rhetorical tactic is to challenge the intentions and decency of those who disagree with you, or attempt to disqualify them from the debate because they go to church, it says something about the strength of your arguments.

Still, this approach has been effective, but only because we have allowed ourselves to be intimidated by these ad hominem attacks. And make no mistake about it, they are ad hominem attacks, even if they come from the side rather than head on.

However, now that you’ve thought about it, I hope glass shattering alarms go off in your head every time someone says they support “marriage equality”.  Then, I hope you start humming Beatles songs, which will beg the question “is it true that love is all we need”?

Once everybody has admitted that a profession of love really can’t be all that is needed for a marriage license, we can have an actual conversation about the subject that consists of more than who is mean and who is nice. Once that happens, we win.